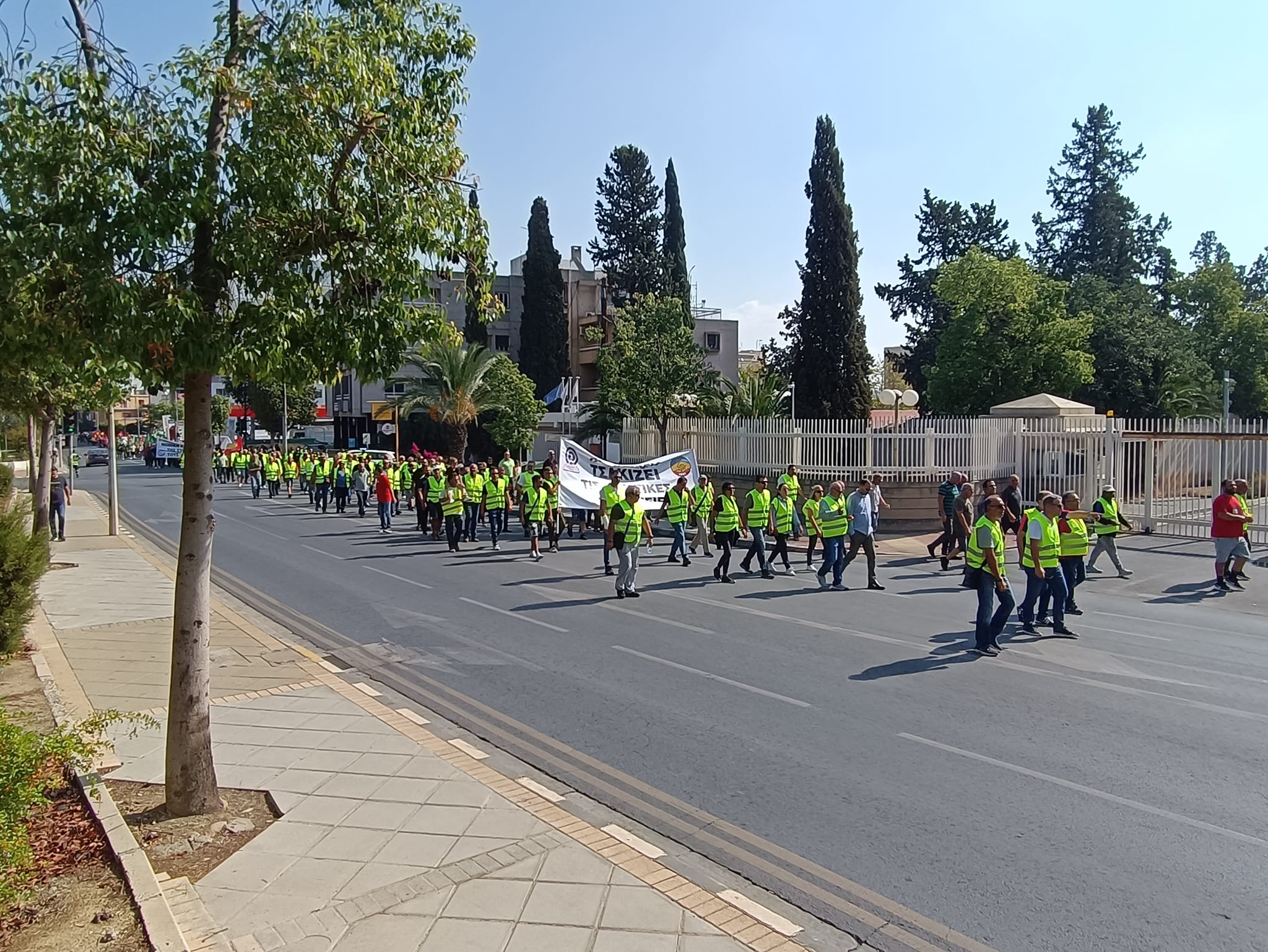 Speech by Sotiroula Charalambous, General Secretary of the General Council of the Pancyprian Federation of Labour (PEO), at the Protest and Assertion March

The message that we’ve had enough of this situation and that it cannot go on any longer.

The cost of the crises and decisions that certain forces and people are taking for us but without us cannot be paid by the working people, pensioners and the vulnerable groups of the population.

In recent years, Cyprus has led the way in the tables concerning the unequal distribution of the wealth produced, social inequalities, the deregulation of labour and in the sharp increase in cheap, unprotected labour.

In a period of continuous positive growth rates, which the DISY government boasts and celebrates as a result of its supposed wise economic policy and because they supposedly know how to handle economic affairs, the share of wages in the national income pie continues to decline, while the relationship between wages and profits is still unequal.

Working people, especially young people, the most vulnerable, those who are being intimidated by their employers so that they won’t organize themselves in trade unions, were awaiting the government's decisions on the minimum wage.

The government decided on a minimum wage of €855 on recruitment and €940 after six months of work with the same employer.

This decision has caused disappointment and provoked anger among workers who feel that the government is humiliating and devaluing them.

It isn’t just the level of the minimum wage that is problematic and unsatisfactory, which is far from being dignified and in line with the current cost of living.  It is also problematic because the government continues to leave the field open for employers to extend working hours without overtime pay, without holiday pay, without paying the 13th month salary and the Cost of Living Allowance.

Working people are also angry because the government's decision is in effect backing those employers who violate sectoral collective agreements.

We are protesting and reacting because once again, as has happened many times over the last 10 years, the government's decisions support erroneous employer practices and that section of employers who base their profits on workers being employed in conditions/terms resembling the middle ages.

More than a year later, with inflation galloping and breaking records and nibbling away at 1/10th of working people’s income, we are now being told to be patient, be a wise consumer and save and turn off our lights.

The decline in working people’s incomes this year, when workers are facing an unprecedented crisis of austerity, is expected to exceed 1.5 billion euros.

We are being told that the government has allocated many millions to deal with the phenomenon of price hikes.

Unfortunately for the government, however, the figures do not substantiate their claims.

Cyprus is fourth from the bottom across the EU in the table as regards expenditure to address poverty and the energy crisis.

It is estimated that as a result of the increased VAT revenues from the ongoing price increases, the government will have collected an additional 1 billion in revenues by the end of 2022.

There is the possibility of meaningful measures being taken to support society.  We have proposed specific measures many times.

By refusing to adopt these measures, the government is in effect choosing once again to stand against society, against the many.  It is opting to behave as a usurer and protector of those who, because of the energy crisis, are seeking to maximise their profits to unprecedented levels.

The current context of the inflation crisis brings the need for the full restoration of the Cost of Living Allowance (COLA) even more strongly and urgently to the fore.

The transitional agreement reached between employers, trade unions and government on how to pay the COLA expired at the end of 2021.  The discussion for a new agreement has not yet began.  Before the dialogue started, the Finance Minister of the DISY government was quick to take a position by declaring that the arrangement that workers get half of the COLA should continue.

Over the last few days new “imaginative” ideas have been heard.  Under the pretext of the argument that not all workers receive COLA, DISY President A.Neofytou is making meaningless proposals, while we haven’t understood what the other like-minded presidential candidate [Nikos Christodoulides] wants to say on the issue.

The full restoration of the COLA and its extension to cover all working people is the only tangible tool to protect workers and their families from the decline in their incomes due to the mounting price increases.

If the concern and worry is about workers not getting COLA, there are ways this can be addressed.

The Cost of Living Allowance should be fully restored and be included as an element of Automatic Minimum Wage Adjustment, with the introduction of legislation that should oblige all employers in industries and sectors that have contracts to apply them to all workers.  Unambiguous and straightforward answers to these issues are needed.

Today's mobilisation is an expression of working people’s growing anger and indignation, but it also conveys a message of determination and assertion.

We do not stand idly by, nor do we consider working people’s collective militant response as some ‘unnecessary fuss’.  Today we are sending out a powerful message that we will not tolerate the continuation of one-sided anti-worker policies.

At every podium, with every means at our disposal, we will in a collective and organised manner assert what we are entitled to!