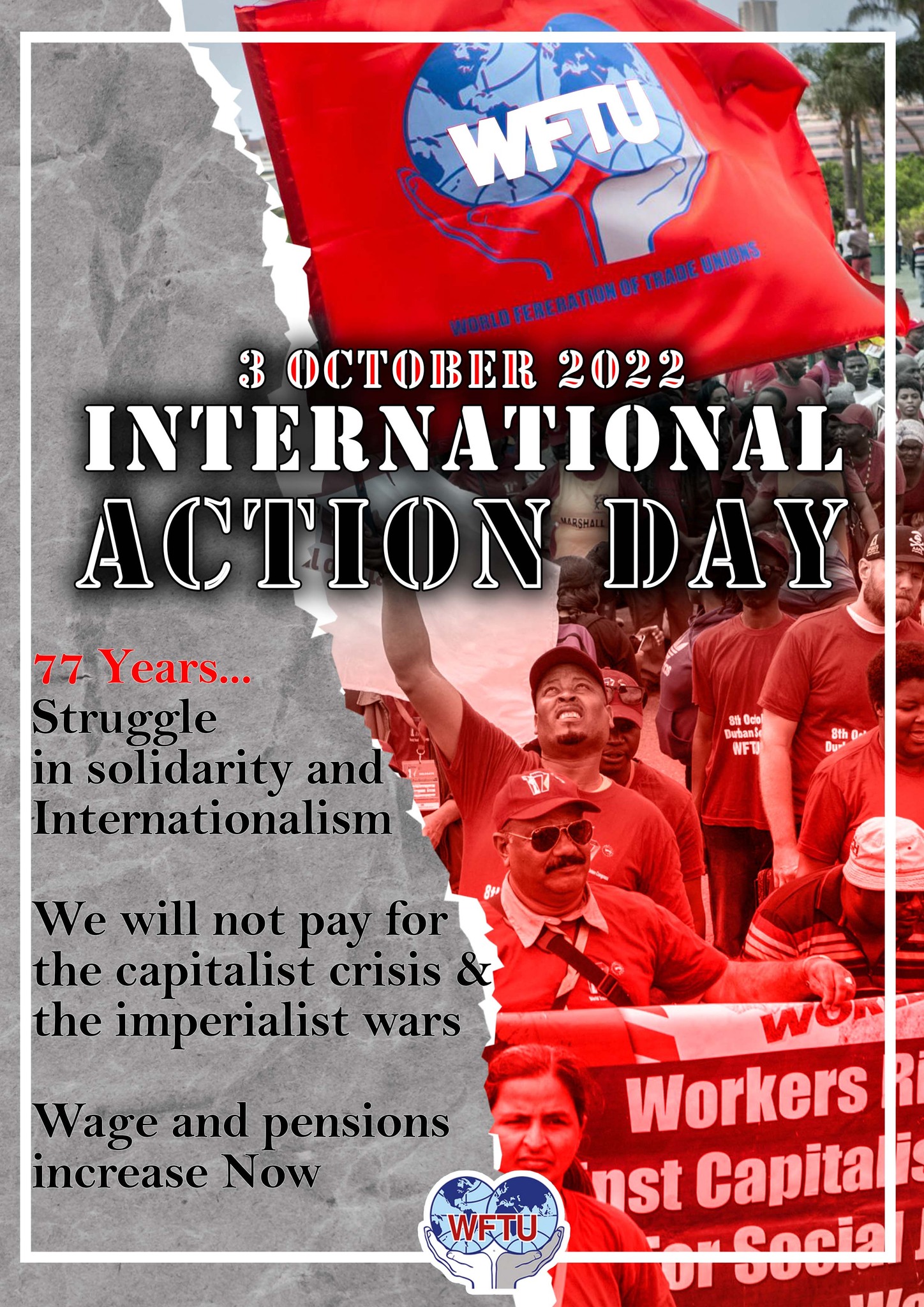 The World Federation of Trade Unions (WFTU) has established October 3, the date of its foundation, as the International Action Day of working people.

This year's Action Day is dedicated to the struggles for wage and pension increases, to defend collective agreements and trade union freedoms and rights, against imperialist wars, racism and xenophobia.

At a time when the pandemic and capitalist crisis have widened social inequalities and poverty, imperialist wars and interventions are inflicting even greater consequences and suffering on the peoples and workers. They cause death and destruction, the displacement of millions of people, the deterioration of their living and working conditions.

Developments in Ukraine following Russia's invasion, the increased military expenditures, ongoing wars and tensions in many parts of our world with the main goal of controlling natural resources and energy sources are leading humanity into a generalised conflict and putting world peace at risk.

Cypriot working people, who for almost fifty years have been experiencing the results of the imperialist designs of NATO and its allies, demand an immediate end to the war in Ukraine and the finding of a peaceful solution on the basis of international law.

The class-based trade union movement of Cyprus stands against wars and imperialist interventions and joins the working people throughout the whole world in the struggle for the defence of peace, for the dismantling of NATO and all military coalitions.

The ongoing war in Ukraine is further deepening the global capitalist crisis and working people are experiencing the economic consequences of the rampant increase in the prices of essential necessities and high rates of inflation which are mercilessly undermining their living standards.  Wages and labour rights are in many cases being reduced and curtailed, while democratic and trade union freedoms are facing new attacks and restrictions.

In our country, Greek Cypriot and Turkish Cypriot workers are experiencing the consequences of neoliberal policies, the deregulation of labour relations, the imposition of anti-labour laws and violations of rights, price hikes and inflation, which are deteriorating working people’s lives even more.

The common problems highlight even more the common class interests of Greek Cypriot and Turkish Cypriot workers and the need to intensify the struggles and solidarity between them.

In the current harsh economic and social conditions, the solution of the Cyprus problem remains a priority and an urgent need since no gain achieved by working people can be permanent and stable as long as our homeland remains divided.

The class-based trade union movement in Cyprus, despite the difficulties, will not compromise with partition. Our unwavering goal is the solution of a bizonal, bicommunal federation, for a single state, with a single sovereignty, a single citizenship and a single international personality, and with political equality of the two communities as described in relevant United Nations resolutions.

The affiliated organisations of the WFTU in Cyprus PEO, DEV-IS, KTAMS, KTOS, KTOEOS, BES, DAU-SEN, KOOP-SEN on the basis of the principles of solidarity and internationalism participate in the October 3 mobilisations organised by working people all over the world and in the struggle against deregulation and for dignified work with rights, for increases in wages and pensions and for the creation of a better society without wars and interventions.

HOPE AND PERSPECTIVE LIE IN THE STRENGTH OF OUR ORGANISED STRUGGLE