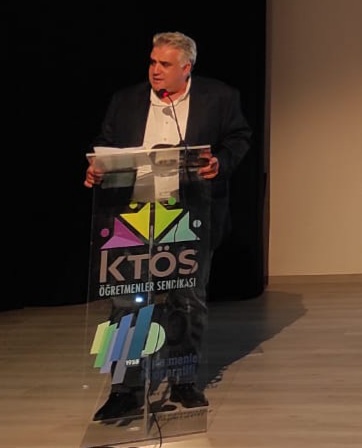 Address by Christos Tombazos - PEO at the Congress of KTOS

Address by Christos Tombazos, Central Organisational Secretary of the Pancyprian Federation of Labour (PEO) at the Congress of KTOS Turkish Cypriot Teachers trade union
20 May 2022, Nicosia

Dear Brothers and Sisters,
On behalf of the General Council of PEO I convey to your Congress the militant and fraternal greetings of the tens of thousands of members of our Federation.

Your trade union organisation, the Turkish Cypriot Teachers' trade union, is one of the most militant sections of Turkish Cypriot workers. It plays a leading role in the resistance against the neoliberal policies that are impoverishing the workers and popular strata. It plays a leading role in the struggle for peace and reunification of our country, as well as in the struggle for democracy and human rights.
Our struggle today for cooperation and joint action between the two communities has a history, and a specific class and political content.
Our comrades such as Kavazoglou, Misiaoulis, Ahmet Sadi, Gurkan and so many others were killed, wounded or persecuted by chauvinist extremist forces in both communities because they fought against the separation and division.
Today we are continuing our struggles together, both in our own country and internationally through the ranks of the World Federation of Trade Unions (WFTU). Our country, Cyprus, although small in size, plays a very important role in the international movement. Proof of this recognition it enjoys is the unanimous election of the former General Secretary of PEO comrade Pambis Kyritsis to the leadership of the World Trade Union Federation at the Congress held recently a few days ago in Italy.
Brothers and Sisters,
The unity of the working class represents the backbone on which the reunification of the people and country can be built.
The class-based trade union movement in Cyprus will never compromise with partition and division.
We know that we face very difficult conditions ahead of us. But we are not going to yield and give up.
We denounce concepts and mentalities that develop and foster intolerance, xenophobia and racism. We stress that they are alien to our people and country and dangerous for the whole of society. The revival of neo-fascism, racism and nationalism can only cause disgust.
We are continuing and intensifying our struggle for a just and mutually acceptable solution to the Cyprus problem within the framework of a bizonal, bicommunal federation, with a single sovereignty, a single citizenship and a single international personality, with political equality as defined in Resolutions of the UN. For a demilitarized and independent state, without protectors and ‘guardians’.
The talks for the solution of the Cyprus problem must resume as soon as possible from where they had remained at Crans Montana, since the absence of dialogue and the imposition of new fait accompli lead to the permanent partition of our homeland.
Dear Friends,
A few days ago we marched together again, after two years of inactivity due to the pandemic. We raised our red flags and honored our class day as befits it. The red Worker’s May Day. It is imperative that we continue on this path of common struggle, of common struggles.
Our goals and visions go much further. The solution of the Cyprus problem and the reunification of our country and people will permit us, as the working class of Cyprus, to focus together on the main, real contradictions of society.
This vision is not impossible. It is realistic and achievable. But to realise it demands a lot of work. It is an unstoppable and persistent struggle.
And we have both the strength and the courage to wage this struggle.
Before I leave the podium, I want to say a few words on behalf of PEO about our colleague, our comrade Sener Eljil, since, as we have been informed, this is his last congress as an official of KTOS. With Sener in the leadership of KTOS we are linked by many years of common struggles. In difficult conditions, he stepped forward and together with other comrades paved the way for the common struggle of Greek Cypriots and Turkish Cypriots. I am sure that both his organisation and all of us will always have him by our side in the struggles to come.
Dear Sener, have a good rest. We are sure that we will meet on the streets of struggle.
PEACE IN CYPRUS CANNOT BE PREVENTED
Again, I wish your Congress every success.